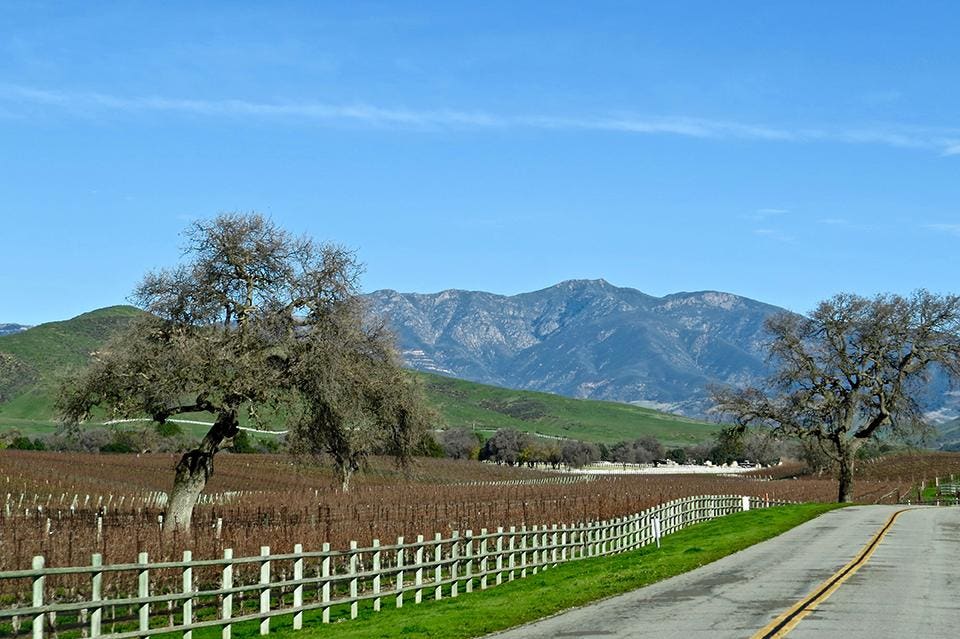 If you want to discover the next big wine region in California, head to Santa Barbara. Home to more than 200 wineries, 170 tasting rooms and six appellations, the county has been capturing the attention and palates of those in the wine world.

It has an unusual typography: the east-west positioning of the coastal mountains forms valleys that open to the Pacific. This allows ocean breezes and fog to roll in and help the region’s grapes thrive. In addition, Santa Barbara’s longer growing season means that fruit ends up spending more time on the vine, thereby changing the taste of the wine.

This is the second leg on our tour to sample California’s wines. We started in San Francisco, where we day-tripped to Napa and Sonoma, and then drove five hours south to Santa Barbara (next week, we’ll tell you about our last stop, Malibu).

To gain access to the top wineries in each region, we turned to Four Seasons, a brand known worldwide for its top-notch service. Each city’s Four Seasons hotel connected us with its go-to wine guide.

Read below to follow Forbes Travel Guide‘s 24 hours of sipping in Santa Barbara. 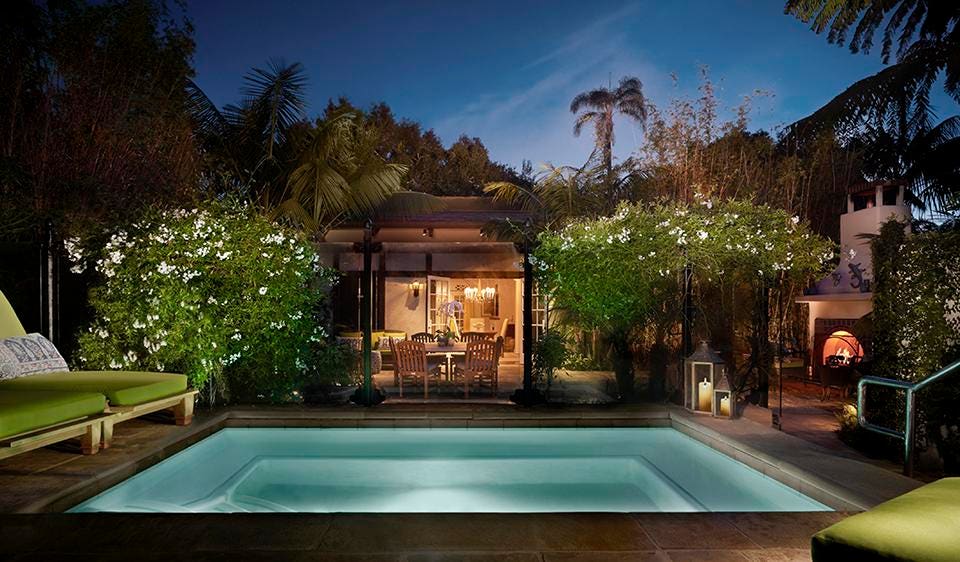 Bikini Maven’s Bold Move Wasn’t About What She Posted, But Where She Posted It

The Drive To Succeed: Meeting The Demand For Modern Auto Technicians

Four Seasons Resort The Biltmore Santa Barbara celebrates its 90th anniversary this year, but its beauty is timeless. The Spanish Colonial Revival design gives off a glamorous Old World feel, while more than 2,000 species of tropical plants and palms covering the lush 22 acres make you forget you’re in the American Riviera.

Each of the elegant rooms is unique, ensuring you won’t have a cookie-cutter experience. But you will want to reserve the just-opened Bungalow Suites. The four new accommodations feel residential — they have a gated entryway, private terrace with heated plunge pool and fire pit, and living room with a fireplace, antique walnut inlaid furniture and hand-sculptured walnut floors.

Plus, the bungalows grant you entry into the luxury hotel’s exclusive members-only Coral Casino Beach and Cabana Club that sits across the street right on Butterfly Beach. Swim in the stunning Olympic-sized pools or sit on the deck for the incredible ocean view. Stay outside with a meal at Coral Casino’s alfresco Tydes restaurant or the new Coral Reef Bar, a 28-foot oval seawater aquarium bar with a living coral reef.

Whatever you choose to do, either arrive early in the morning to catch the dolphin pods bobbing in the water or in the evening for an up-close look at the pastel explosion that is a Santa Barbara sunset. 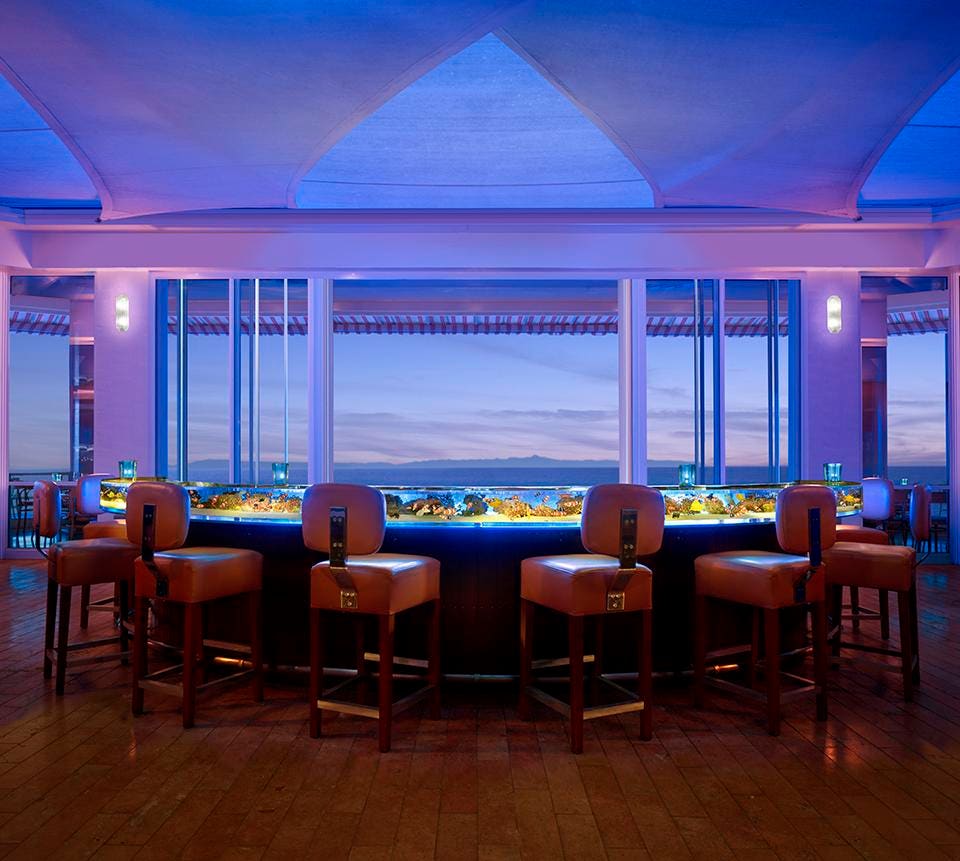 The Forbes Travel Guide Four-Star hotel paired us with Matt Cooper, the amiable owner and founder of Coastal Concierge, a company that specializes in luxurious private wine tours that incorporate everything from horses to helicopters.

We went the traditional route and had Cooper create a five-hour VIP itinerary. His goal, he said, was to give us a solid overview of Santa Barbara County wines and show off their diversity.  “There are 60 different varietal grapes,” he said about the county, “Napa grows 20.”

First up was the Santa Ynez Valley, the American Viticultural Area (or AVA, an official wine-growing region designated by the Federal Alcohol and Tobacco Tax and Trade Bureau) with the largest concentration of wineries in Santa Barbara. 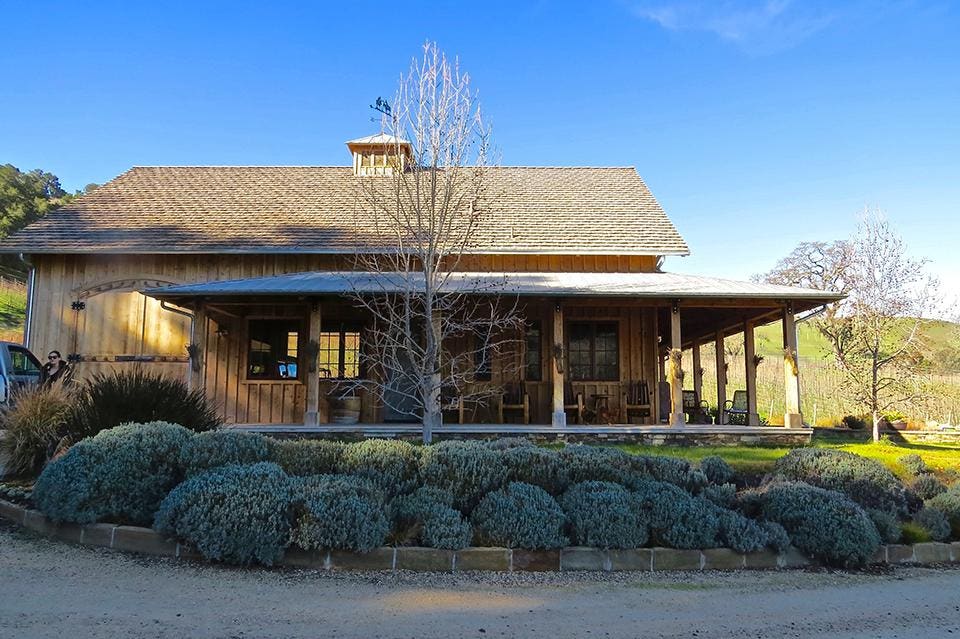 Refugio Ranch has tasting rooms in Los Olivos and San Luis Obispo, but Cooper brought us to its picturesque 415-acre vineyard at the base of the Santa Ynez Mountains. Chickens greeted us on the porch of the wooden tasting room. Max Gleason and his wife, Vanessa Bley, then appeared and ushered us into the cozy appointment-only tasting room, which looked more like a stylish Southwestern-inspired living/dining room.

Refugio specializes in Rhône-driven wines, like the excellent 2014 Escondrijo, a medium-bodied pour of grenache, syrah and petit sirah with some nice spice and a strong floral bouquet.

As we swirled and sipped the 2013 Ineseño (a roussanne-viognier blend named for the indigenous people of Santa Ynez), Gleason told us about his family’s winery while soft jazz played in the background — we learned it was Twin Danger, a duo featuring Bley and Sade saxophonist Stuart Matthewman. Gleason also has a creative side — his art adorns the tasting room’s walls and Refugio’s bottle labels.

After the tasting, we climbed into an ATV to explore the former cattle ranch grounds, most of which remains untouched, since the Gleasons only planted less than 30 of the acres. The large pond with oak trees bearing gnarled branches, in particular, is a place you will want to linger. On the southwest corner of the property, we soaked up a view of the Santa Ynez River and the valley. 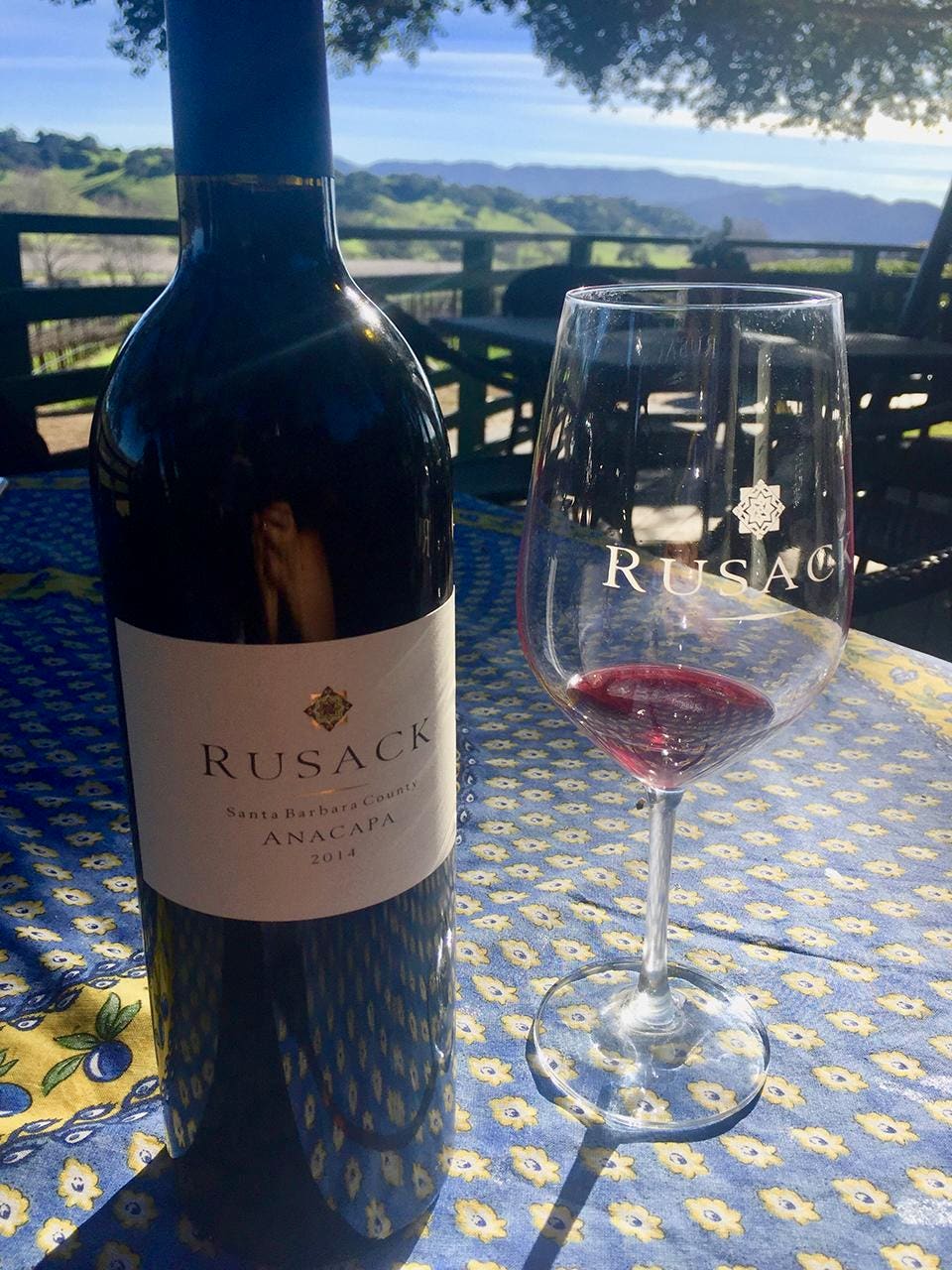 Next, Cooper drove us through Solvang, where we marveled at the Danish-style architecture and windmills, to arrive at Rusack Vineyards. The small boutique winery has the only tasting room in the Ballard Canyon AVA.

Having Cooper and the Four Seasons behind us allowed us access to pours usually reserved for wine club members, like the Anacapa, a blend of cabernet franc, merlot and petit verdot with hints of black cherry, dried cranberry and cocoa. Another selection we tried that’s not typically on the tasting list is the 2013 Santa Catalina pinot noir, a lush wine that comes from an oceanfront vineyard on Catalina island.

The real reason to visit Rusack is its redwood deck that looks out on the surrounding rolling hills. Under the shady oaks, Cooper set up a picnic spread of rosemary-herb and cashew-coated chicken, spinach-pesto pasta salad, triple-cream Brie, two-year-aged Gouda, baguette slices and grapes. 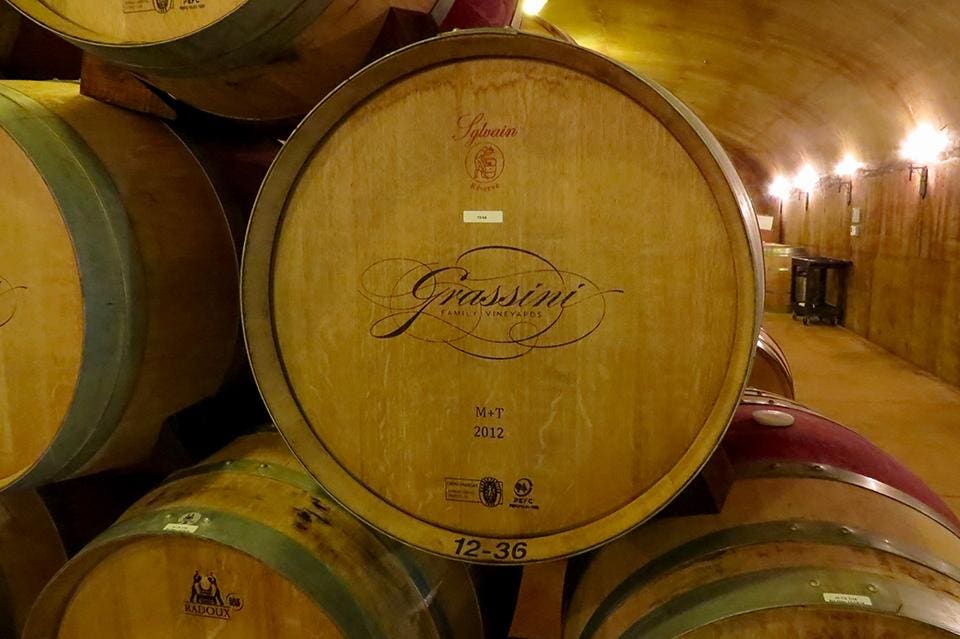 For our final stop, we went to Grassini Family Vineyards in the Happy Canyon appellation, which sits on the eastern border of the Santa Ynez Valley. It’s a by-reservation-only visit (though you can pop into its open-to-the-public downtown Santa Barbara tasting room whenever the mood strikes) to sample the family owned winery’s highly sought-after Bordeaux varietals.

The 2014 Articondo Bordeaux makes a great choice for food pairings. Made of cabernet sauvignon, petit verdot, merlot and cabernet franc from the estate’s own vineyards, it can handle both big meaty dishes and delicate fish and pasta plates.

For something with a bolder profile, we savored the 2013 Estate cabernet sauvignon, with strong blackberry and black cherry flavors and a longer finish.

After our tasting, we descended into the hillside wine caves, where we learned about Grassini’s eco-friendly practices — it uses reclaimed 300-year-old fir wood and solar power on the winery and vineyard, and the water for irrigation comes from the onsite lake. It makes you feel good about ordering a case or two.

After a long day of tasting, it will be difficult to leave the Santa Barbara hotel’s gorgeous grounds, and onsite Italian restaurant Bella Vista gives you one more reason to stay. Dinner on the ocean-view terrace is enchanting, especially at sunset, with a blazing fire pit, lantern-adorned juniper trees and the song of the waves colliding.

The charcuterie is a must — we kept reaching for the flavorful capicola and the spicy soppressata. Bella Vista is the only restaurant in Santa Barbara that cures its own meats. It also keeps a cheese cave under Tydes and boasts an impressive wine program.

Our server paired the 2015 Sanford rosé from the nearby Santa Rita Hills AVA with our dainty beet salad and chose the full-bodied 2014 Row Eleven pinot noir to break down the creaminess of our from-scratch gnocchi. Both were spot-on picks to cap off our day of drinking in stunning Santa Barbara.